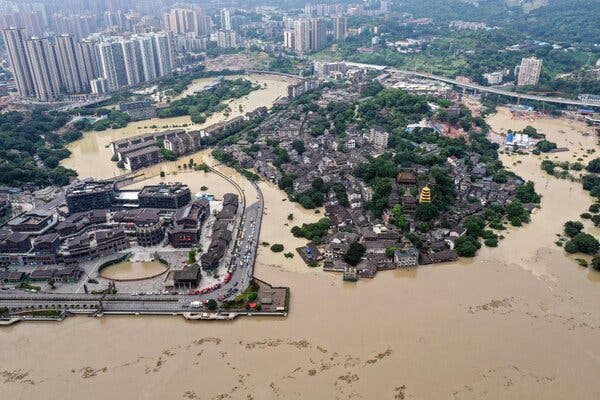 Having brought the coronavirus pandemic largely under control, China’s leaders are now struggling with a surge of crippling floods that have killed hundreds of people and displaced millions across the central and southwestern parts of the country.

Flooding on the Yangtze River peaked again this week, in Sichuan Province and the sprawling metropolis of Chongqing, while the Three Gorges Dam, 280 miles downstream, reached its highest level since it began holding water in 2003.

This year’s flooding has unfolded not as a single natural disaster, with an enormous loss of life and property, but rather as a slow, merciless series of smaller ones, whose combined toll has steadily mounted even as official reports have focused on the government’s relief efforts.

“The Chinese nation has fought natural disasters for thousands of years, gaining precious experience,” the country’s leader, Xi Jinping, declared on Tuesday after a visit to Anhui, another flooded province downstream from the Three Gorges Dam. “We should continue to fight.”

Mr. Xi called China’s disaster relief efforts “a practical test of the leadership and command system of our army.” He met with relatives of three people who died while fighting floods, and on Wednesday he addressed officers of the People’s Liberation Army and the People’s Armed Police, which have been involved in the relief work.

Public appearances in flood-stricken areas by Mr. Xi and China’s premier, Li Keqiang, underscored the severity of the crisis, which has delivered another blow to an economy still struggling to rebound from the pandemic.

Mr. Li visited Chongqing, where the Yangtze spilled over its banks for the fifth time this year and, on Thursday afternoon, breached the historical high reached in 1981. The leaders have tried to reassure people that the government was doing everything it could, but some might have doubts.

“I believe that the Chinese public will question Beijing from this year’s continuous natural and man-made disasters, and even question China’s governance model and its effectiveness,” said Wu Qiang, an independent political analyst in Beijing.

One resident of Chongqing, in a video of the flooding there that circulated on a popular social media platform, said: “The losses have been heavy for many businesses, fighting the pandemic in the first half of the year and flooding in the second half.”

Climate Fwd:: Our latest insights about climate change, with answers to your questions and tips on how to help.

The floods had already caused at least $26 billion in economic losses before this week. At a briefing in Beijing last week, Zhou Xuewen, the secretary general of China’s flood control headquarters, said that at least 63 million people had been affected and 54,000 homes destroyed. At least 219 people have died or disappeared, he said.

In Sichuan on Friday, a landslide caused by heavy rains killed at least six other people in a village near Ya’an. Another in the same region left five people missing.

Heavy rains are normal in southern China during the summer, but this year’s fell harder and longer than usual, inundating crops and entire communities over the last two months. Perhaps not coincidentally, Mr. Xi announced a campaign against food waste against the backdrop of the flooding, though officials have insisted there is no impending food crisis.

The heavy rains this year have revived a debate over the Three Gorges Dam, a massive project begun in 1994 that forced the relocation of more than a million people, inundated entire communities and badly damaged the surrounding environment.

The flow of water into the dam’s reservoir reached 75 million liters a second, breaking a record of 61 million liters set just last month, according to a statement from the Ministry of Water Resources. Although officials said the dam was in no danger, the water level has approached maximum capacity.

Since the floods began in June, officials have repeatedly offered reassurances that the dam could withstand what has been called once-in-a-century flooding. Some reports in state media have gone further, claiming that the dam had almost certainly prevented even worse flooding in major cities downstream, including Wuhan, where the Covid-19 pandemic began.

On Friday, officials announced that the flow into the Three Gorges dam had eased somewhat, though they remained on alert. “The flood control pressure on the middle and lower reaches of the Yangtze River has been reduced,” the government’s Xinhua news agency reported.

China’s other great waterway, the Yellow River, has also experienced more flooding. The Ministry of Water Resources said in a statement that in Shaanxi Province on Friday, the river had reached the highest level since 1997. Nearly 700 smaller rivers and tributaries have also flooded, straining older dams and levees.

The floods have threatened some of the country’s most famous landmarks. In Sichuan, floodwaters rose to the base of the Leshan Giant Buddha, a 1,200-year-old sculpture carved out of the mountainside that is a UNESCO World Heritage site.

In Chongqing, the flooding consumed Ciqikou, an ancient riverside trading port near where the Jialing River merges with the Yangtze. Xinhua reported that the waters reached the third stories of some buildings on the steep riverbank. Photographs showed brown water submerging vast stretches of the city’s waterfront, including Hongyadong, an 11-story structure that is a popular tourist destination.

The structure has been closed since Tuesday and workers have been clearing out the mud that reached its lower levels.

“It’s too scary how the water rose,” the manager of a restaurant there, who would only give her surname, Zhang, said by telephone on Friday. “Humanity is insignificant in the face of disaster.”